18 Who is a God like unto thee, that pardoneth iniquity, and passeth by the transgression of the remnant of his heritage? he retaineth not his anger for ever, because he delighteth in mercy. 19 He will turn again, he will have compassion upon us; he will subdue our iniquities; and thou wilt cast all their sins into the depths of the sea.

9 When they had heard the king, they departed; and, lo, the star, which they saw in the east, went before them, till it came and stood over where the young child was. 10 When they saw the star, they rejoiced with exceeding great joy. 11 And when they were come into the house, they saw the young child with Mary his mother, and fell down, and worshipped him: and when they had opened their treasures, they presented unto him gifts; gold, and frankincense, and myrrh.

6 For unto us a child is born, unto us a son is given: and the government shall be upon his shoulder: and his name shall be called Wonderful, Counsellor, The mighty God, The everlasting Father, The Prince of Peace.

The one who had been promised to purge sin from his people has come.

He was spoken of by the prophets. He was longed for by those found in captivity. He came to bring us into a right relationship with the Father.

Apart from Jesus the Christ, mankind has religion. They go to mass or to some cultic event or service. Religion fails in its attempts to cause us to be made right with God.

Others with their good works have attempted to gain their position in heaven. Others have tried to purchase their way out of a supposed purgatory. But only Christ Jesus came to set us free.

Through the virgin was pure and undefiled she gave birth to the Lord and then contjnued having other children. Her purity was reserved and only for the birth of the only savior. After that she was as all wommen are, needing of a savior too. We envision her frail, frightened position as she was to bring forth a son, though she had never been intimate with a man.

This was the miracle. But this was not the ultimate gift of God. She was just a faithful servant, a vessel used of God.

Then we see Joseph, a carpenter. A skilled worker, one who used his hands. He was no scholar, nor was he some respected ruler. He too was a commmon man. A frightened man who was about to divorce the young lady he loved privately, so she would not be harmed. Or was it to protect his good name?

The fact of the matter was he was just a man noble perhaps, but just as we are.

God then manifested himself in his ultimate sacrifice. As He, being God and Creator of all, clothed himself in vulnerability. He put of his royal robes… he took of the dress of eternity and immortality to become himself a creature.

Our minds cannot understand it. We cannot truly comprehend it. Our words fail to see this transformation fully. Yet we in faith accept the fact and believe that Christ made himself a child for us.

Christmas is more than Bethlehem…

It is more than the baby in the manger…

It is more than some beautiful story. It is the pivitol moment when God himself made himself weak, and frail and vulnerable for us.

It is when he became flesh…

This was dome in order that the plan of redemption would become available for mankind.

This is however only the begining.

This is not the full story.

The Christ child grew. He grew and became a man. He showed us compassion as he healed the lame, and made the blind to see. He demonstrated a life of one who did not place others on pedestals by the positions they held in life. But rahter he looked at the unlovely. He cared for the widow and the orphan. He spent time with the marginalized by society. He looked upon the lepers whom no one would touch. He went to the home of the tax collector and broke bread with him and taught him the truths of his kingdom.

This man later gave back what he had taken from others.

Jesus went into the highways and by ways and loved on the ones others had spat on. He chose to find himself teaching, preaching and sharing his time with the lost and the wounded.

Yet this, no this was not the culmination of the gift of God.

Jesus finally was tried in a mock trial. He was sentenced to death on a cross. Though the rulers found no fault in him. He was made to hang on a tree. For you and for me. This gift was poured out. The fragrance of heaven was poured out so that the sweet smelling fragrance would penetrate the heavens and reach the Father’s throne. He was poured out to purchase us back. So in this way we would not be held in bondage any longer. His blood covers all sin. Future, past and present.

All who come to his cleansing flow can be delivered from the stain of sin.

But this was yet not the fulfillment of the total gift.

After dying on that cross. Jesus was placed in a resting place. All hope was lost. All those who had followed him were dismayed. They felt cheated and forsaken. Yet Jesus had spoken and stated to them before his death, I must go to the cross. He had not magically come off of the cross for them. He had not performed any great miracle. He had died. He had been martyred. Now what? Their illusions of reigning with him was squashed. For some, they thought of returning to their original work. Let’s go fishing… back to carpentry… back to tent making… back to whatever their past lives had been. They someone had lost faith.

Yet the ultimate gift was about to be unwrapped. For on the Third day …

The tomb was empty. The women went to the tomb. They thought they would cry and weep together. They migh have had a plan to grieve…

But their weeping turned into dancing.

Their sorrow turned into joy. Their fears turned in to hope and they were revived! This all occured on that third day. Jesus Rose from the grave! 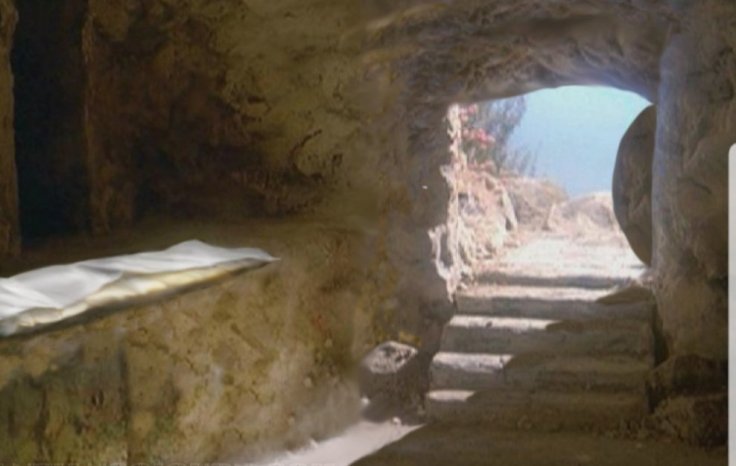 He conquered sin once and for all! He conquered death! He then unwrapped the full gift of Redemption for humanity.

There we have it. The total gift.

Not the Virgin birth, not the dying on the cross alone, but now the resurrected King!

There is no other name by which we can be restored to a fright relationship with the Father. Jesus name is Wonderful! His name is above all powers and above all thrones. He is sovereign and forver Lord of all.

This is why we come together and some call us radical! We are radical! We who were lost sheep have been found. We who were doomed to eternal punishment and separation from our Heavenly Father, have now been reconnected. We can boldly come and ask for what we have need of knowing Jesus, our Lord, God and King is our Elder Brother. He is our defender. His blood covers our transgressions, our wrong doings are no longer an issues. We are forgiven because of his ultimate and complete gift of Salvation. His Birth, Death and Resurraction assures all who come to him of reconciliation with the Father.

My job, my role in this, my responsibility is to Believe, Trust and Follow Him. The rest He has already done.

Do you have this marvelous gift? Have you only considered the Manger scene…

Have you wept at the scene of the Cross? I compell you to go further…

Take the full gift of Christmas! Accept Christ gift of Forgiveness as he is the Risen Lord. He is able to redeem you. Cleanse you of sin and resotre you.

Come, and you too will say Merry Christmas!